Recognize patterns in Java code to understand and transform applications 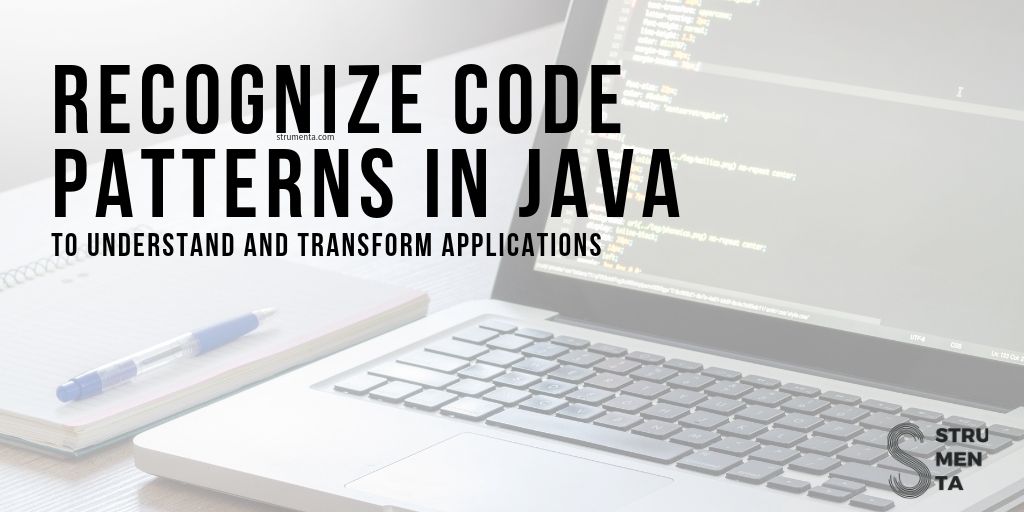 Code is arguably the most valuable asset for many organizations.

However the value trapped in the code is not easy to use.

In this article we are going to see how we can extract and process knowledge in code by specifying patterns. We will see:

What do you mean? Show it to me

Let’s see what we mean in practice, with the simplest example we can come up with. And let’s see it working for real, on real code.

Of course recognizing properties is a very simple example, something we are all familiar with, but the same idea can be applied to more complex patterns.

There are many patterns that can be used:

Patterns can be regarding small pieces of a single method or the organization of entire applications.

Patterns can also be applied incrementally: we can start recognizing smaller patterns, making the application simpler and then recognize more complex patterns over the simplified application.

How knowledge end up being trapped in code

Developers use a lot of idiomatic small patterns when writing programs. Experienced developers apply them automatically while implementing their solutions. Slowly they build these large applications that contain a lot of knowledge, enshrined in the code.

The problem is that the initial idea is not stated explicitely in the code. The developer translates it into code by using some of the idiomatic patterns typical of the language, or linked to the framework is using, or specific to its organization.

Somewhere a developer is thinking: “this kind of entity has this property” and he is translating it to a field declaration, to a getter and a setter, to a new parameter in a constructor, to some additional lines in the equals and the hashCode methods. The idea of the property is not present explicitly in the code: you can see it if you are familiar with the programming language but it requires some work.

There is so much noise, so many technical details that shadow the intention

But this is not true just for Java or for the properties: when a developer determines that an object is unique he could decide to implement a singleton, and again this means following certain steps. Or maybe he is deciding to implement a view or a Data Access Object (DAO) or any other typical component required by the framework he is using. In any case all the knowledge he had in mind is scattered in the code, difficult to retrieve.

Why is this bad?

What it means that is difficult to see the knowledge in the code?

A lot of work go into understanding a problem and build a representation of the solution in the code. There are a lot of micro-decision, a lot of learning involved in the process. Then all of this effort lead to knowledge.

Where does this knowledge go?

If the knowledge was represented directly, to an higher level of abstraction it could be easier to check it and it could be accessible to more persons.

What it means that is difficult to reuse the knowledge in the code?

We have seen that basically the only way we have to extract knowledge from code is reading it and understanding it. The results stay just in our head, so they are not usable by a machine. If we had instead a representation of the abstract knowledge, the original intentions, we could elaborate them for different goals.

We could for example use that knowledge to generate diagrams or reports.

Do you want to know how many views have been written? How many tables do we have in the database? Easy! Project managers could get their answer without having to ask. And they would get always the updated, honest answers on the state of the code.

Ok, we have talked about the problem, let’s now talk about a solution we can build today.

We are previously discussed how to build grammars using the whole platform and we have seen it also when looking into Domain Specific Languages.

The code is available on GitHub, courtesy of Riccardo Solmi, the author of the Whole Platform.

First of all we need to define the higher level concepts, that we have in mind but are not expressed explicitely in the code. For example, the concept of property of a Java bean.

In the model-driven parlance we define the metamodel: i.e., the structure of those concepts.

2) Define how to recognize such concepts in Java code

Once we have those concepts defined we need to specify how to identify those in the code. The whole platform use a Domain Specific Language to specify patterns. It looks like this:

What are we saying here?

We are saying that a certain pattern should be looked into the selected node and all the descendants. The pattern should match the given snippet: a Field Declaration with the private modifier, associating the label type to the type of the field and the label name to the name of the field.

What should happen when we recognize this pattern?

Now, what we need to do is just to add this action into the contextual menu, under the group name Refactor. We can do that in Whole by defining actions.

Voila! We have now the magic power of recognizing patterns in any piece of Java code. As easy as that.

3) Doing the opposite: expand the concepts

So far we have discussed how to recognize patterns in code and map them to higher level concepts.

However we can also do the opposite: we can expand higher level concepts into the corresponding code. In the whole platform we can do this with this code:

Let’s focus exclusively on the property definition. Each instance is expanded by:

Now, the way we recognize the pattern and the way we reverse it is not 100% matching in this example, bear with us over this little discrepancy. We just wanted to show you two different ways to look at properties in Java.

What this approach could be used for

We see this approach being useful for three goals:

We could define patterns for all sort of things. For example, patterns could be defined to recognize views defined in our code. We could imagine to run queries to identify patterns. Those queries could be used by project managers or other stakeholders involved in the project to examine the progress of the project itself.

They could also be used by developers to navigate into the code and familiarize with complex codebases. Do we need to identify all observers or all singletons in this legacy codebase? Just run a query!

The fact is that programming languages tend to be very low level and very detailed. The amount of boiler plate code varies between languages, sure, but it is always there.

Now, one of the problem is that the amount of code could hide things and make them difficult to notice. Imagine reading ten Java beans in a row. Among them there is one that implements the equals method slightly differently from what you expect, like for some reason it ignores one field or compare one field using identity instead of equality. This is a detail that has a meaning but that you would very probably miss as you look at code.

This happens because after looking at a large amount of code and expecting to see certain patterns you become blind to those patterns. You stop reading them without even noticing it.

By recognizing patterns automatically (and precisely) we can represent higher level concepts and easily spot things that do not fit in common patterns, like slight differences in equals methods.

We have seen how to recognize bean properties, but we can go further and recognize whole beans. Consider this example.

We can recognize incresingly complex patterns by proceeding incrementally. In this way exceptions pop up and do not remain unnoticed.

When we write code we translate some higher level ideas into code, following an approach that depends on the technology we have chosen. Over time the best technology could change even if the idea stay the same. We still want the same views but maybe the way to define them is changed in the new version of our web framework. Maybe we still want to use singletons but we decided is better to use public static methods with lazy initialization to provide the instance, instead of using a public static field.

Code has an incredible value for organizations because it captures a lot of knowledge in a form that is executable. As we evolve our applications and we cover more corner cases we improve our knowledge and our code. After years of developing a code base it becomes often invaluable for the organization owning it. However that value is like frozen: there is not much we can do with it. It is even difficult to understand exactly how much information there is in the code.

We think that one approach to extract knowledge from the code is proceeding bottom up: recognizing the small abstractions and composing over them, step by step, until we recognize larger structures and patterns and can represent easily the big picture hidden in our application.

Using the  Whole Platform is invaluable for these experiments.