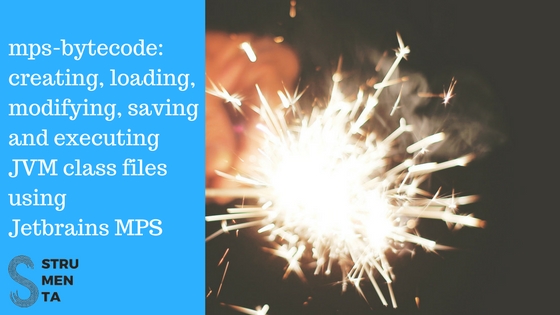 I recently created this project to edit JVM class-files inside Jetbrains MPS.

Code is on GitHub, as always: mps-bytecode

You can compile it simply by running:

Now you have a class file. You can import that class file in MPS. To do that you just create a ClassFileLoader, type the filename of the class file and click on load

I will add support to import whole JARs. It should be pretty simple.

Taking a look at the class file

One key element of the class file is the constant pool. It is basically an indexed list of elements which define constants. Each of these elements has one type and it is followed by some data.

Look at this example: 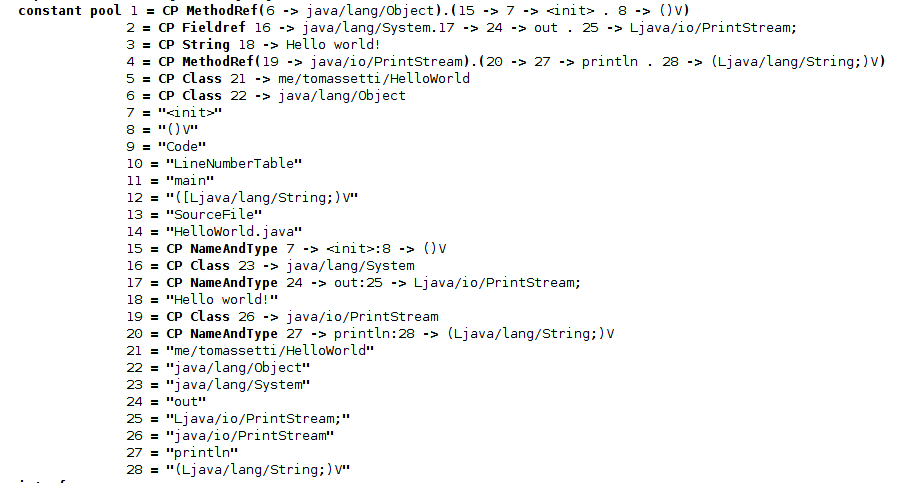 Note that when we loaded the file we created proper references between class pool elements. That means that if you move the referenced element (e.g., 18), the element holding the reference (e.g., 3) will be updated automatically:

We have then fields and methods. This class contains two methods, even if we defined just one. The additional method is the default constructor:

It contains the access flags, the name and descriptor indexes (the actual strings “<init>” and “()V” are contained in the Constant Pool). After that there are the attributes. One very important attribute is the “Code” attribute which contains the instructions which are executed by the JVM when this method is invoked.

In addition to that there is one attribute of the code attribute: it basically tells us the line numbers corresponding to the different instructions

This is instead our main method: 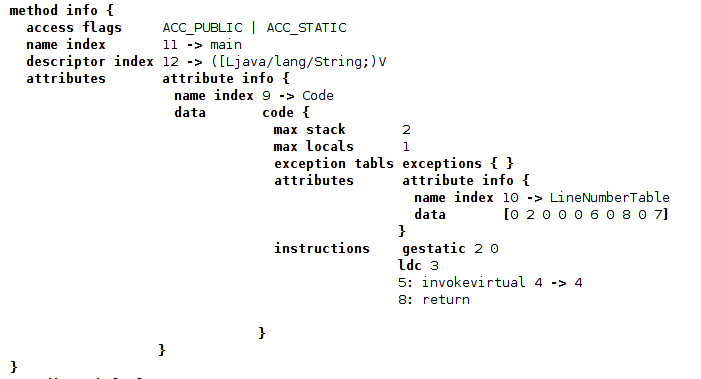 Not much more code here:

It does the following:

Running a class file from inside MPS

You can also run classes inside MPS.  You have to define Executors like this one:

The executor defines the class to invoke, the classpath to use and the arguments passed to the main function.

In this case we just specify a link to a class file, no additional classpath entries and no arguments

Modifying and saving a class file

We have seen how to import a Class File but you can also create them from scratch. You can then edit the class files as you want and save them simply by generating the project containing them. The editor knows about the semantic of class files so it will help you writing consistent class files. For example, if an instruction requires using an index to a Constant Pool String element this will be verified for you. Writing class files is not trivial, so a little help is not bad.

What can this be used for?

Aside from having fun and learning more about the JVM, my goal is to define new languages to compile for the JVM, without having to generate Java source code.

Now, in many cases it can be simpler to just generate Java and let the Java compiler handle the bytecode generation for you. However on one side there is possible valid “JVM code” which cannot be obtained by compiling Java. This could involve invoke dynamic, for example. In addition to that there is a guts-feeling factor: if I generate Java code and compile that my language does not feel completely to be a real language. I know it is not rationale and there are plenty of proper languages which generated C code instead of producing machine code, however this is a sensation I cannot fight for now. So I will play a bit more with these concepts and see what I learn from this.

What do you think of this? Any other usage you can envision for it? 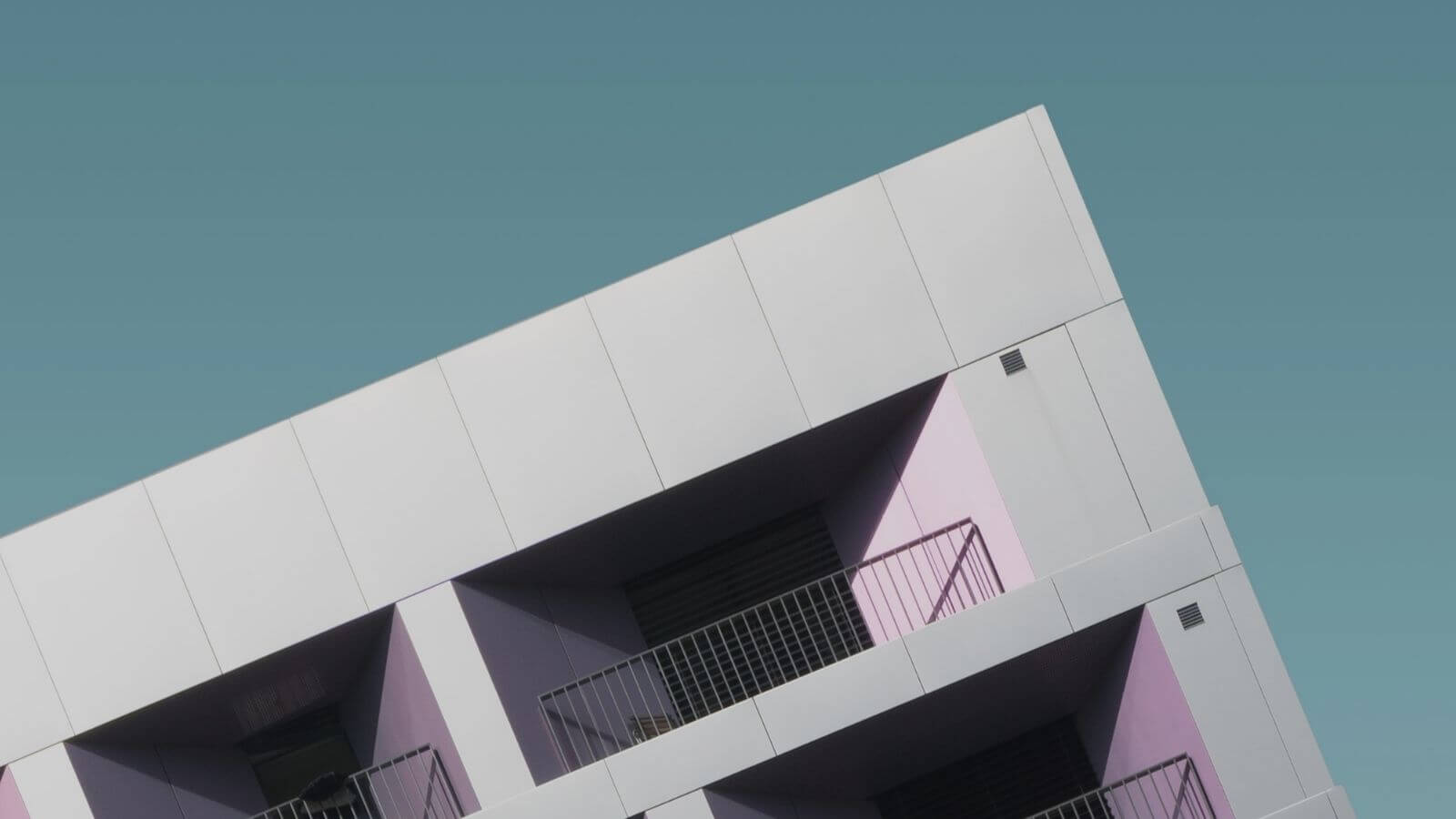 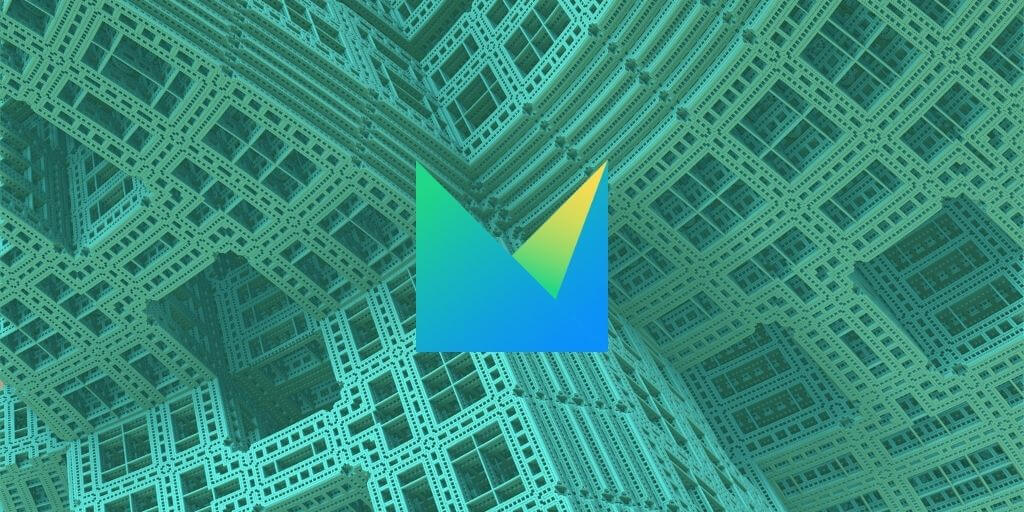