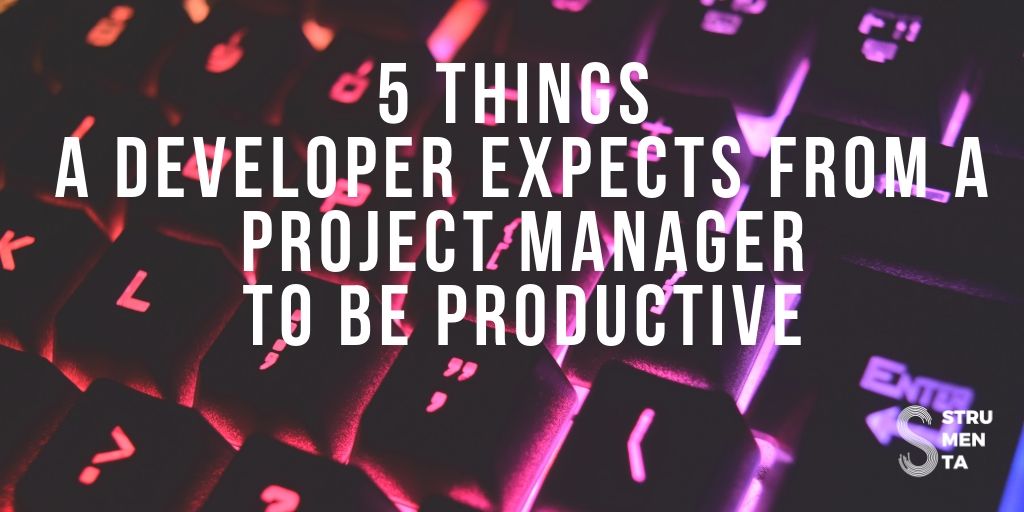 To be effective as a software developer technical excellence is not enough. On top of that there are several other aspects on which a great professional should focus. Near the top of my list there is the ability to interact with other people involved in the project. Whatever is the nature of your project you will need to interact to get things done:

Developers and PMs… not always love at first sight

Relationships with Project Managers can be a bit controversial from time to time: we as developers are very prone to complain about them. After all they are the ones bothering us about some change that need to go in at 6 PM on a Friday. Or the ones who keep pushing for features which do not make sense to us.

However I think that Project Managers play a fundamental role in successful team. And as a developer I can be successful only if the team is successful. For this reason I think that having a great relationship with Project Managers is they key for delivering results. I was lucky enough to work with amazing Project Managers that really helped me. This was especially true when I was at TripAdvisor: there I met PMs who were absolutely great. That does not mean I did not complain about them with my fellow developers from time to time :)

It does mean however that I understood that if we were going in the right direction, if we were delivering features at an high speed and if we were able to coordinate our projects with the rest of the company it was because of their work.

So I am very convinced that PMs can make a difference. But this difference can be either atrociously negative or wonderfully positive. I am not saying I understand all the responsibilities of a PM and I am sure there is a lot of things they do without interacting with developers like me. I am just thinking specifically to how PMs interact with developers and what kind of expectations I have as a developer towards PMs.

From my point of view a Project manager could make the life of developers easier by doing these five things.

We are all over-worked and we all have crazy piles of work who someone expects us to do within the week. As a developer I need to be able to evaluate the effort needed to complete each task and the relations between tasks. Perhaps a certain refactoring will simplify developing a certain feature, so it makes sense to order those tasks accordingly. A certain task could take two weeks, while implementing these three other features could require just half a day for each of them. So I could prefer to work on them first.

But technical aspects are just half of the picture: ordering tasks require us to be aware of the priorities business have. What is most important for the customer? Which features can have an immediate impact on our revenues? That is very important for us to know to decide where to spend our energy and what to deliver first. I think PMs need to discuss frequently with developers what are the priorities and understand that business priorities and technical priorities need both to be considered to decide on what we are going to work next.

And sometimes PMs technical priorities are important too: they cannot always be ignored to consider only business priorities, because doing so it is going to affect our ability to deliver software and consequently the business.

2) Let the developers know about deadlines well in advance

Did ever happen to you to find out that something is needed… later today? Or that the customer was promised to receive a new build yesterday? Those are not nice surprises. Let’s be clear: sh*t happens and require us to deal with it. The application goes down and the company loses money every minute: you stop whatever you are doing and you fix it. A new bug is found and it is bad, a security concern needs to addressed as soon as possible. In real life there are things that we cannot plan for. We can just react to them.

However this cannot be the case for everything, we cannot always be doing Emergency-driven development. This is just bad practice. Deadlines need to be agreed upon and communicated, so that they can be planned for. As developers we frequently do not see the whole picture but the same goes for PMs: there are technical aspects that they could be ignoring and that could make not possible to meet a deadline, without knowing far in advance. So please dear PMs: let us know about deadlines as soon as you know them.

Caveat: when I say “let the developers know about deadlines” I mean the real deadlines. One of the worst thing a PM could ever do is to present some fake, self-imposed deadline. Some PMs came up with the idea of assuring themselves a time buffer by telling the devleopers that the customer expects the delivery to happen on the 1st when they actually agreed on the 15th. Maybe they do that because we frequently deliver things late but… guess what? Sooner or later developers will find out and think about all the useless stress or the long hours they went through because of your lies. How do you think they are going to react?

I know it could sound not plausible but developers tend to have a few defects. One of them is that developers tend to communicate… differently. They tend to be direct and blunt. And that works great with machines, a bit less with customers. Yes, it is possible that the SDK the customer given to you seems… suboptimal. Yes, it could seems a perfect example of what a bunch of monkeys could do if we would give them a box of cheap whiskey and a manual of all the possible bad practices in software engineering. Well, still it is not a good idea to let the customer knows about that. It is much better to let the PM rephrase that for us.

And I love when the PM chase the customer about that decision we need him to make. Or talk with the PM of another team to convince them to answer to the requests from our team. Yes, we really needed an answer, all the three times we forwarded again the same requests that was ignored for the last couple of weeks.

A fantastic PM will provide us with all the information we need to do a our job and ensure communication run smoothly with all the parties involved. We probably will not even realize the effort he had to put on this.

Life in a company is stressful. Stress comes from different sources and it needs to be managed. As Software Developers we deal with a lot of stress coming from technical challenges: a bug which is very difficult to reproduce, an intermittent issue depending on threads synchronization, the new release of a framework which silently breaks everything, an unreliable piece of infrastructure that makes some integration test to fail. We have plenty of reasons to be stressed.

And PMs have too: they deal more than us with the internal politics, they take part in discussions about what features to develop and which not, they could fight to get resources for the team. They could compete with other teams, they have customers screaming at them. Well I am sorry for that but if PMs start to push all their stress on the developers, then we, the developers, will end up being between the anvil and the hammer. We would be both constrained by the reality of technical difficulties and the pink-pony-crazyness of customers and politics. That is just too much so let’s have a deal: we stress with technical stuff and that is our burden. All the rest, I am sorry for you PMs, but this is for you to deal with.

5) Make sure we work on relevant projects

It could happen to work very, very hard on building something that has a very limited impact on the company product. While it could be a satisfaction anyway for someone who loves to build cool stuff in the long run this is going to be detrimental for your career. It does not help you getting a promotion if you keep working only on irrelevant stuff. Working on something that can really make a difference for the business have several advantages instead: it gives you additional motivation, the possibility to get noticed and possibly access to more resources and more support from the organization.

Working on irrelevant features is not yet the worst thing that could happen. It could happen to work on projects that are discarded before or immeditaly after they are completed. Imagine put your passion and sweat on something that is just thrown away. Not a nice feeling, eh? So it is better to work with PMs who do not put you in such situations.

I think Project Managers intercept many problems before we can even see them. They are our interface with the customers and with the rest of the organization. They ensure we are working on something which will provide value to our users. They keep track of the whole picture so that we can have the luxury to just focus on the next feature to implement, test it and ship it.

And it is a fact that developers take PMs for granted most of the time. I think it is pretty common for developers to underestimate PMs. We often just do not understand all their responsibilities. But trust me, if you work with a great PM and a… not so great one, you will definitely notice the difference.

I hope both us developers and project managers can benefit from a better relationship. I can tell you it is possible to do so: I live with a PM who happens to be my girlfriend :)