Docker as a Developer: How to Build an Environment You Can Trust 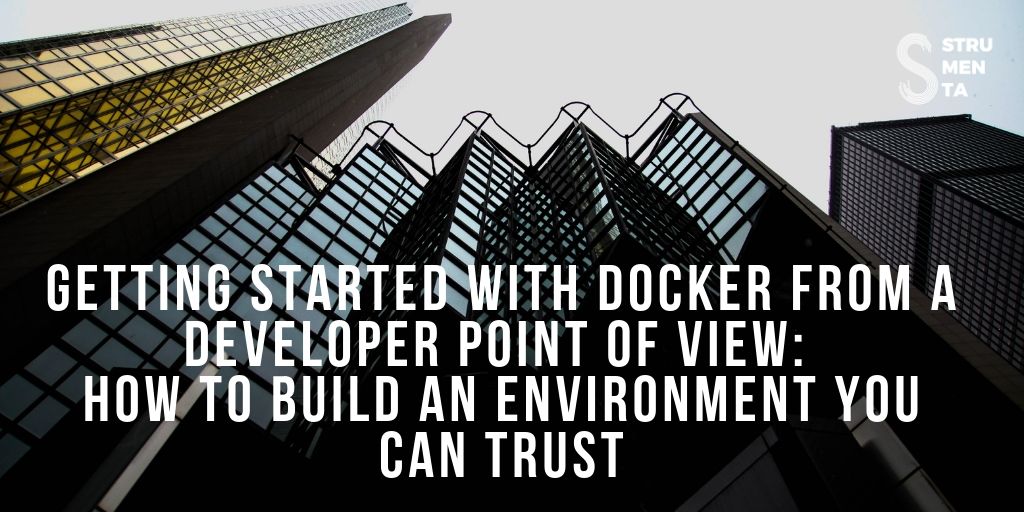 Lately I have spent a lot of thoughts on building repeatable processes that can be trusted. I think that there lies the difference between being an happy hacker cracking out code for the fun of it and an happy hacker delivering something you can count on. What makes you a professional it is a process that is stable, is safe and permit you to evolve without regressions.

As part of this process I focused more on Continuos Integration and on techniques for testing. I think a big part of having a good process is to have an environment you can control, easily configure and replicate as you want. Have you ever updated something on your development machine and all the hell breaks loose? Well, I do not like that. Sure, there are a few tools we can use:

These tools help a lot, but they are not nearly enough. Sometimes you have to access shared libraries, sometimes you need a certain tool (apache httpd? MySQL? Postgresql?) installed and configured in a certain way, for example:

There are many things that you could need to control to have a fully replicable environment. Sometimes you can just use some scripts to create that environment and distribute those scripts. Sometimes you can give instructions, listing all the steps to replicate that environment. The problem is that other contributors could fail to execute those steps and your whole environment could be messed up when you update something in your system. When that happen you want a button to click to return to a known working state.

You can easily start having slightly different environments w.r.t. your other team members or the production environment and inconsistencies start to creep in. Moreover if you have a long setup process, it could be take a long time to you to recreate the environment on a new machine. When you need to start working on another laptop, for whatever reason, you want to be able to do that easily. When you want someone to start contributing to your open-source projects you want to lower the barriers.

It is for all these reasons that recently I started playing with Docker.

What is Docker and How to Install It

Basically, you can imagine Docker as a sort of lightweight alternative to VirtualBox or other similar hypervisors. Running on a linux box, you can create different sort-of virtual-machines all using the kernel of the “real” machine. However you can fully isolate those virtual machines, installing specific versions of the tools you need, specific libraries, etc.

Docker runs natively only on Linux. To use it under Mac OS-X or Windows you need to create a lightweight virtual machine running Linux and Docker will run on that virtual machine. However the whole mess can be partially hidden using boot2docker. It means some additional headaches but you can survive that, if you have to. If I can I prefer to ssh on a Linux box and run Docker there, but sometimes it is not the best solution.

To install docker on a Debian derivative just run:

Let’s start with a simple example: let’s suppose you want to develop a PHP application (I am sorry…) and you want to use MySQL as your database (sorry again…).

We will create two Docker containers: on the first one we will install PHP, on the second one MySQL. We will make the two containers communicate and access the application from the browser on our guest machine. For simplicity we will run PhpMyAdmin instead of developing any sample application in PHP.

Note that this is a very simple example: we are not specifying a certain version of httpd to be installed. When installing some other software we could want to do that.

From the directory containing the Dockerfile run:

This command will create a container as described by the instructions. As first thing, it will download a Centos 6 image to be used as base of this machine.

Now running docker images you should find a line similar to this one:

You can now start this container and login into it with this command:

Once you are logged into the container you can start Apache and find out the IP of the docker machine running it:

Now, if you type that IP in a browser you should see something like this: 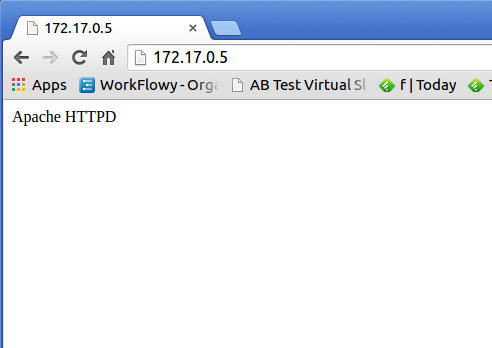 Cool, it is up and running!

Let’s improve the process so that 1) we can start the httpd server without having to use the console of the Docker container 2) we do not have to figure out the IP of the container.

To solve the first issue just add this line to the Dockerfile:

Now rebuild the container and start it like this:

Wonderful, now let’s get started with the MySQL server.

We want to create a Dockerfile in another directory and add in the same directory a script named config_db.sh.

Note: we are not saving in any way the data of our MySQL DB, so every time we restart the container we lose everything.

Now we can build the machine:

Then we can run it:

And we can connect from our “real box” to the mysql server running in the docker container:

Does everything works as expected so far? Cool, let’s move on.

Let’s assign a name to the mysql container:

Now let’s start the PHP container telling it about the mysqlcontainer:

In practice, a line is added to the /etc/hosts file of the phpmachine, associating dbhost with the IP of our mysqlmachine.

We are using PHPMyAdmin as the placeholder for some application that you could want to develop. When you develop an application you want to edit it on your development machine and making it available to the Docker container. So, download PhpMyAdmin version 4.0.x (later versions require mysql 5.5, while centos 6 uses mysql 5.1) and unpack it in some directory, suppose it is in ~/Downloads/phpMyAdmin-4.0.10-all-languages. Now you can run the docker container with php like this:

This will mount the directory with the source code of PhpMyAdmin on /var/www/html in the phpmachine, which is the directory which Apache httpd is configured to serve.

At this point you need to rename config.sample.inc.php in config.inc.php and change this line:

In this way the phpmachine should use the db on the mysqlmachine. 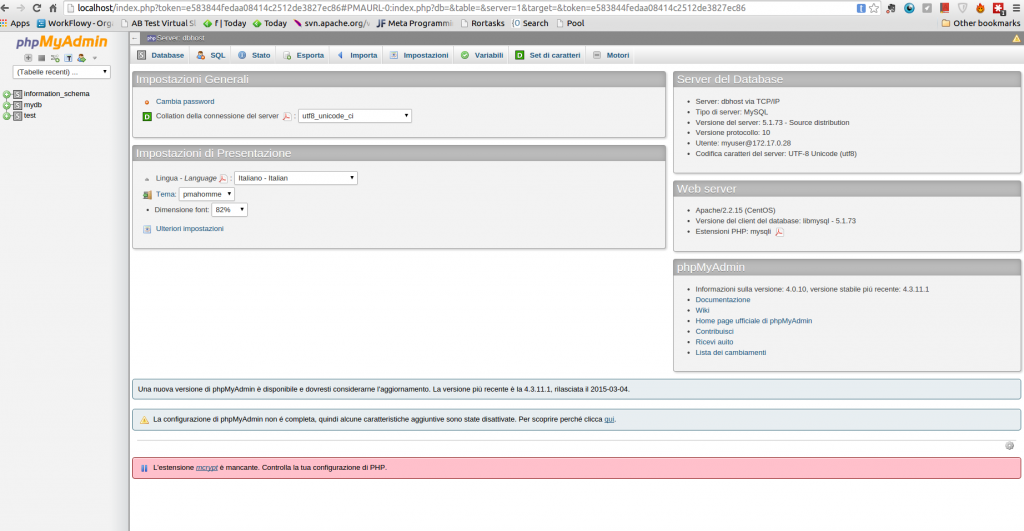 How Does Docker Relate to Vagrant and Ansible, Chef, Puppet?

There are a few other tools that could help with managing virtual machines and sort-of-virtual machines. If you are a bit confused about the relations between different tools this is an over-simplistic summary:

This post gives some more details about the relations between these tools.

In our small example we could play with a realistic simulation of the final production setup, which we suppose composed by two machines running CentOS 6. By doing so we have figured out a few things (e.g., we have packages for MySQL 5.1 and it forces us to not use the last version of PhpMyAdmin, we know the complete list of packages we need to install, etc.). In this way we can reasonably expects very few surprised when deploying to the production environment. I strongly believe that having less surprises is extremely good.

We could also just deploy the Docker containers itself if we want so (I have never tried that yet).

Update: I am happy the guys at Docker cited this article in their weekly newsletter, thanks!